The jnani in the poetry of Shanta Acharya

When I was a child the only thing I really associated India with were elephants, tigers and a
Ladybird early reader on which gleamed phantasmagorical an image of The Taj Mahal.
I lived in a small town on the North West of Ireland without an Indian restaurant or any
other cultural signifier of the presence of the other. We had an International Folk Festival
every August during which visitors from other places would perform in the Town Square.
My friends and I were avid attenders.
I remember trying to copy the hand movements of some Indian dancers. We surmised
that this grace was synonymous with all Indians, and were more than envious. After all,
what other country had as symbol a testament of a husband's love for his wife? India had it all
for the girl that I was : tigers, elephants, dancing, and the certainty of adoration in the hazy
marital future. All these years later, life has widened my lens. Scant knowledge replaced
by the experiential knowledge of writers as diverse as Kipling, Chandra, Seth, The Bombay
Review until I arrived at the shores of Shanta Acharya.
This journeying was the backdrop to my own efforts in the fields of poetry, and resulted in a
trip to London to read from my first book of poetry " The Language of Coats' in Lauderdale
House. This reading was hosted by Shanta, the series of monthly readings called 'Poetry
in the House'  that took place between 1996 and 2015. And so began for me a journey that
looked at India through the female lens and also as importantly through the lens of reconciling
the differences between two cultures. Born and educated in Cuttack, Odisha, Acharya won a
scholarship to Oxford, where she was awarded a Doctor of Philosophy for her work on Ralph
Waldo Emerson. Harper Collins India has just published " Imagine", which brings together
poems from her first five collections and new verse, from which the book takes its title. 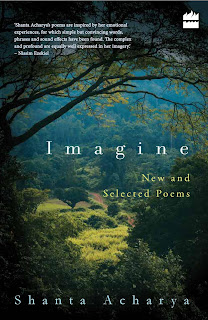 The poem the collection opens with is from ' Not This,
Not That' published in 1994, and is titled ' Faith'.

you need not know

This is the answer the young poet receives when she
pricks a balloon to discover what is inside. It is the
same answer she receives when she pricks her finger
to discover how she bleeds. This fatalistic worldview
is reiterated in the final verse of this stunning little
poem when they both tell their questing daughter: 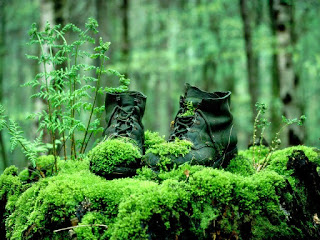 The poems from Acharya's fifth collection " Dreams that Spell the Light" (2010) are poems that tell of journeys to other places and to other cultures. The one that spoke most directly to my multiple selves was most definitely " The Sunderbans".
The Sunderban is a vast forest in the coastal region of the Bay of Bengal which is one of the natural wonders of the world. Its literal translation is ' beautiful forest'. It is an important habitat for the endangered Bengal tiger. Lines like ' A twelve-year-old tigress, one canine missing/ patrols the village with a gap-toothed grin.' bring the tiger back from the metaphor of
Blake into the here and now.
She says that only the pure of heart enter its labyrinth and that ' all migrations leave scars'.
I loved the similitude between our own human migrations and those of the animal kingdom.
I must also admit to not knowing what an apple snail was until reading this poem. What an
apt naming though. I also did not know that elephants retreat when they hear the approach of
bees from the honey trees. Imagery that is rich in concrete detail and at a slant from the
humdrum marks Acharya from the crowd, but she surpasses herself in this poem. The last
lines :' The Sunderbans may one day disappear/leaving no man fit to take the measure of
another' are also characteristic of the deep wisdom of her philosophy.
Acharya comes full circle in her quest for knowledge. In " Black Swans" she asserts that
' There is no way of knowing what we don't know'. There is nowhere to go then but
to ' The Wishing Tree", where mother and daughter ' cast dreams that spell the light'.
In the final section of the book the reader is treated to new poems from 'Imagine'.
It is no surprise that this title poem focuses on the natural world. All boundaries have
dissolved and all borders too. She asks us to imagine a world after a succession of
images of nature and her creatures bereft of nature's blessing. This poem softens the
blow of the previous poem " Nirbhaya", which means fearless one. This poem was
inspired by the death of Jyoti Singh Pandey who was gang raped on a bus in Delhi on
16 December 2012. In accordance with Indian law, her name was not publicly disclosed
as she was raped.She was dubbed the fearless one by the Indian media. Her father wanted
the world o know her name and so he revealed it.The last lines bring us back to that central
tenet of knowledge but this time we know that the jnana women bear and reveal is
one which requires jnani.
.." As long as I can summon the strength to pick myself
up when cast in the gutter, and rise like a phoenix-
I'll let the universe know it does not exist without my dreams".
Like the yogini in the forest in " Spring Fever" Acharya is in splendid possession of her
poetic craft and the knowledge she has accrued over the years culminates in a conquest
not of her animal self but of all the multiple selves she and we are. In the poem that
concludes this collection, Acharya returns to a figure from her country's history in a search
of the answer to the question' what makes a good leader?' " Ashoka" is her answer, and in
its 335 lines Shanta Acharya not only narrates an important life from her country's history
but also asserts her right to write it. The confidence in the poems that conclude this collection
show the jnani that is such an integral part of the belief system of Hinduism.
My initial romantic notions of an India that builds palaces for its beloveds, and that is roamed
by elephants and tigers was a beautiful illusion. Without that illusion I would never have
been prompted to journey through finely wrought tales of life across the waters. I would never
have acquired my own jnani of the country that gifted me many happy dreams without having
read the deeply wise poems of the yogini that is Shanta Acharya. And all this without never
having visited the country that gifted us one of their finest poets.